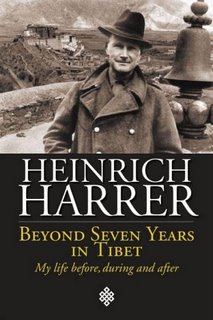 News from Lakesman Tim Carruthers that his translated autobio. of Heinrich Harrer is nearly ready, hopefully October. Looking forward to it Tim...

Book Description
The first publication in the English language of the autobiography of one of the worldâ€™s most well known adventurers: Heinrich Harrer who died early in 2006. Best known in book circles for his bestsellers Seven Years in Tibet (1953) and The White Spider (1958), this book brings to life those and his many other adventures. Heinrich Harrer, traveller, explorer and mountaineer led one of the most extraordinary lives of the twentieth century. He famously spent Seven Years in Tibet (made into the film in 1997 starring Brad Pitt as Harrer himself) and was tutor, mentor and a lifelong friend of the Dalai Lama. He made the first ascent of the notorious North Face of the Eiger in 1938 (told in his book The White Spider). The Eigerwand had been a scene of carnage in the years preceding Harrerâ€™s success - an achievement partly overshadowed by the perennial debate over the extent to which the climbers were â€˜sponsoredâ€™ by the Nazis. In this dramatic autobiography he brings to life all of his adventures, from the early days of climbing in the Alps, through his time in Tibet, to his later expeditions including exploring the Congo with the King of Belgium and travels to remote parts of Asia, South America and Africa.