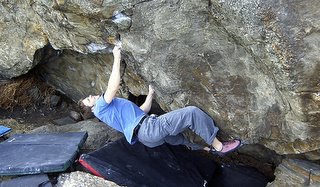 Tim Rankin has climbed the hardest confirmed boulder problem in the North East, and Portlethen's gnarliest creation so far, at V11. Here's the news from Tim himself:
'...heres the description and as for the grade I don't care but am tempted to give it a provocative 8a+ based on other things I've worked but it must be there abouts 8a/8a+.
This problem takes the challenge of the widest part of the Pit roof from the back then climbs the faint hanging arete feature to finish up "The Pain" Start sitting at the back wall under the widest part of the roof on the right side of the Pit. Desperately pull on using an undercut and a small side-pull, grab the good hold on the lip and power up and left to gain the good undercut and an easier finish straight up.'
February 2006
Tim Rankin has been busy with Chris Adams, best buddy Mark and new Devon boy 'cool-hand' Luke, who is eating up the local testpieces. This well-bicepped North East crew have created some truly hard bouldering monstrosities at Portlethen and Clashfarquhar recently. Latest to fall is Tim's long-term project coming out from the cave into The Pit Right Hand... the crux is a series of undercut reaches and power step-ups on smears. A taped up pair of denims on the right leg is crucial for holding an unlikely knee bar. This is a power problem which requires high-tension accuracy like a drawn bow... a modern classic which awaits a first repeat... Oh, he called it Georgie Boy (after his poor-boy underwear!) and it is a hard Font 7c+ or V10 if you want another number. Two British 7a moves gives you an idea what's needed! 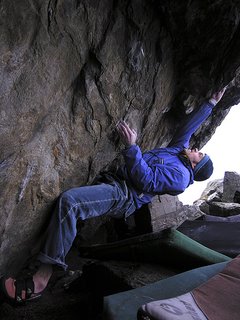 Georgie Boy V10, Portlethen - Tim Rankin
On the wild soaring roof below The Pit, Chris Adams cranked out backwards from the mezzanine to gain the lip. Wild heel-hooking and tenuous sloper moves lead to jugs on the nose which gives EDGE OF REASON at about V7/8. Take plenty of mats and spotters, as this is a line which demands commitment! Rated by all as one of the best in the area...
Chris Adams on the first insane moves of his own Edge of Reason 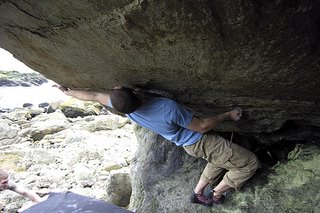 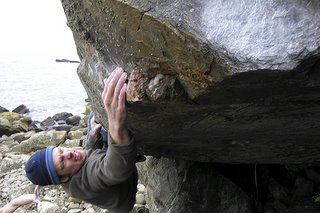 Tim Rankin on Beyond the Edge of Reason

Tim Rankin put his shoes back on and showed us how to do the low eliminate of this line BEYOND THE EDGE OF REASON V9, which attacks the awful looming sloper below the jugs on the nose, continuing round into the groove. Cold conditions and a good spot are essential to break through this crux sequence. 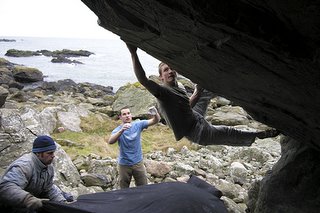 Luke, cool as you like on the sloper lip of Beyond the Edge of Reason