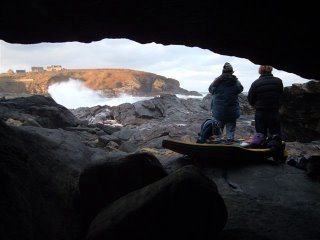 Port Nis - pic by Helen Suzanne
The winter solstice, 6 hours of daylight, the sun skimming low over a watery horizon, driven by a Hebridean wind. The rain lashes the window like sand and the wind hokes in the chimneys looking for something lost... it was only to be expected on a winter bouldering trip to Lewis. The land here is romantically bleak and skirted with a coastal fringe of hardbitten gneiss: veins of ancient colour run through it and everything has shape in it, like frozen creatures in the midst of some weird metamorphosis. The old myths of being turned to stone if you look back are evident everywhere on this howling coastline. A museum of rock where the pinnacles, the waves of rock, the faces in stone, the tortured headlands, exhibit the faces of a previous life beyond all memory. This is where the old Gaelic stories are born out of the exposed stones and given the cloth of meaning. Good people live here, with television and internet and wellies in the hall, but it is as if when we come here we all move like beings caught in the amber of ancient myth. 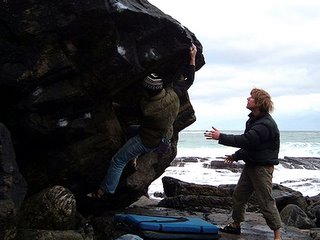 The climbing was disappointing, mainly due to the inclement seepage on the best lines, very frustrating for a short visit, but it's easier to be patient here in this old land and there are other things to be learnt from the rock and nature when you can't climb. I was shown around and explored some of the steeper lines, hoping they would be dry and maybe I'd get some stunning footage on film, but it was not to be. The only line we found climbable were the lines on the Sea Peanut at Port Nis and the nearby Atlantic Bridge cave, which John Watson despatched with more obvious holds for a less giddy proposal than the first ascensionist! John pronounced it a three-star classic, if only the nearby primeval power of wind and sea didn't make it all seem so embarrassing to proclaim such a thing! Certainly one to seek out if you're in the area. 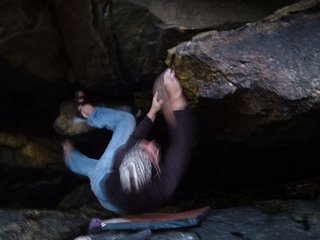 Yarding it out along Atlantic Bridge - pic by Helen Suzanne

A walk to the Aird beaches at Dell, scoured by storms and down to stoney winter bones, revealed the scope of bouldering here - it is an endless affair with rock, reluctant to be placed in history, where everything moves on, on to the next bay, relentlesss waves of exploration... 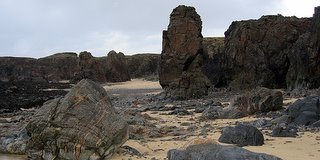 The Semaphore Stac at Aird
A flying visit to Clisham and Tarbert led to the discovery of some more fine rock and hopefully some forthcoming film on one of the finest pieces of rock in this corner of the world. Superb hospitality awaits you here, and some excellent rock: take a pinch of salt, do not be terrified by the myths and leave your hubris behind - it's a land of generous movement and wild dreams.