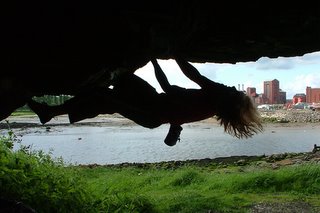 This year has seen a continued exploration of Scotland's vast bouldering potential, with many new venues and ascents from a growing critical mass of boulderers. The sheer remoteness of some venues has meant repeats will be slow in coming, but these are some of the most impressive confirmed bouldering ascents of the year.

February at Dumby and Dave MacLeod has been busy on the rocks, with the first major ascent of the year: 'Smokescreen' V12. He describes it thus: â€œThe second big project to go in the Firestarter cave. Start just left of the flat lip jug with both hands in a good slot. Levitate up and slightly left on atrocious glassy slopers until it is possible to make a technical slap right to a tiny ripple on a smooth ramp. Go again for the High Flyer jug and finish up this. devious and technical with a backbreaking landing. Hardest bloc at Dumby in Feb 2005.â€� 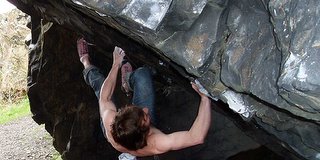 March 2005, Dumbarton. An invigorated Dave Macleod climbs the link-up into his previous year's highlight of 'Sabotage' to give 'The Perfect Crime' - a tortuous adventure out of the depths of the BNI cave onto the lip of the BNI slab. Dumby's first V13, but not his last this year! 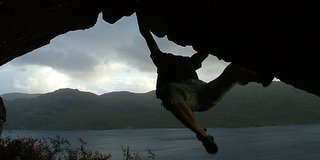 Chris Graham on the underbelly of The Sword V10,
which appears to have lopped off his head...
In the same month Chris Graham added one of the finest lines to the NW Highlandsâ€¦ the stunning dramatic line of 'The Sword' V10 Font 7c+ at Craig Mhor Bhrinicoire on Loch Morar. He finally succeeded in between rain showers. He describes it: 'The superb and outrageously steep prow below the main crag from a sit start right at its base. Dynamic and powerful moves up the blade lead to a difficult slap between two slopers either side of a chockstone (not used!) and then to the top. Brilliant!'


Not a traditional month for bouldering, June in Scotland can be cool and perfect for hanging slopers when other areas in the UK are too soapy. At Dumbarton, Malcolm Smith took advantage of his strength and reasonable conditions to link up the two lines of 'Pongo Sit-start' and the reverse of 'In Bloom' to give the bicep-mashing combination that is 'Supersize Me' V13, laying down the guantlet to MacLeod once more! 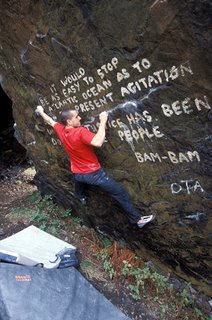 Mal Smith on 'Supersize me' V13
Pic courtesy of www.cubbyimages.co.uk
Again in June, on the east shores of Loch Lomond, Chris Graham revisited the Spinach boulder and climbed its impressive roof to give 'Out of the Blue' at a grade of V9. 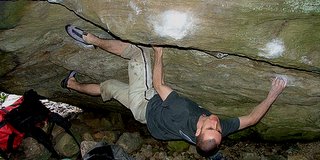 Chris Graham on his own 'Out of The Blue' V9, Loch Lomond
Not to forget about the Aberdeen crew, Tim Rankin reported further development south of Portlethen in the bouldery bays of Clashfarquhar. With others, he added scores of new problems, with the highlight being the excellently named Central Belt Mafia:

Sweet Cheeks 7c Climb the impressive overhanging arete on the landward side of the biggest boulder from a sitting start off the obvious break. Excellent moves slapping up Sweet Cheeks!

Central Belt Mafia 7c+/8a From the sitting start of Sweet Cheeks take the right side of the arete up to the hanging blind crack, slap up crimps and slopers either side of this to a hard rockover onto the slab (the problem Candy Man 7b) the scoop on the left is out. 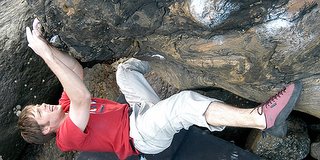 Tim Rankin
December 2005. back to the black heart of Dumbarton and Dave MacLeod pulls another out of the bag - the long-desired project of the Gorilla cave falls at last! Dave enthused:

This time I found a bit more toe hook trickery that made the crux flow much better and immediately I started getting to the last couple of moves. I fell off 11 times from the last move then had 5 days off and did it first try December 12. I hit the jug but my feet came off (which normally means game over) but had a weird cut loose moment where time slows down and you cant tell if you've done it till the legs finally swing in again.

A great way to end the year with possibly the most demanding of the V13's at Dumby! 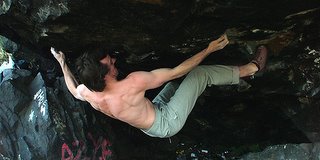 Pressure V13 - Scotland's hardest Dumby problem to date...
There were notable repeats: Tim Rankin climbed Craig's Wall and the sit start to Shrinking Violet at the Thirstane - confirming it to be hard and worth V11. 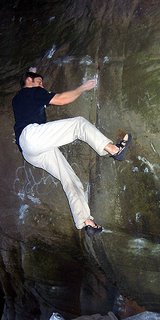 Gary Vincent mashed 'King Kong' in a fight and in December the route-maestro Alan Cassidy repeated the awesome 'Sabotage' (nice one Alan!)... the list goes one, but lots of people made great progress this year and expanded the range of venues... I'll cover that in another post.