December 22, 2005
Thanks to Stuart Stronach for pics of an exciting new venue: Muchalls Shore, south of Portlethen. Stuart reports: 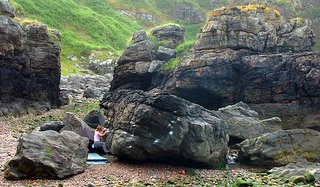 "Itâ€™s a few miles south of Portlethen â€“ a broad pebbly beach with assorted boulders, craglets and pinnacles that now offers nearly 100 problems, mostly very easy but with a few up to V5. As such, it will hopefully attract those who find the Portlethen circuit a little too intense, and/or those new to bouldering. The mostly friendly landings also make a pleasant change from the boulders and rocks on other coastal spots. That said, there are a few problems which require a â€˜shallow water soloingâ€™ mentality, including Chris Fryerâ€™s Smile Around the Face. 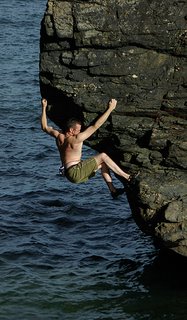 Smile Around the Face V2

Downsides? Well, itâ€™s more tidal than Portlethen, so barnacles can be a problem when the tide is out, and the problems are spread out over a larger area. 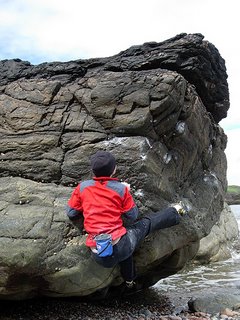 Potential for more problems? The area immediately north of the current developments is a complex arrangement of through-caves and arches which provide some very steep rock. Some of it is crumbly, some of it is greasy, but there are areas which could yield some much harder problems than have currently been climbed. There is also potential for some sport routes to be done on the landward face of the massive stack/headland out to sea from the descent path.

The main developers have been myself, Amanda Lyons, Chris Fryer and Rowie Beaton, with the odd contribution from Ben Tye, Andy Inglis, Matthew Bernstein and Dave Bruce.

Iâ€™ve put together a wee guide to the areas which Tisos are selling for me â€“ full colour topos plus text descriptions of every problem plus photo illustrations throughout."
GR 903916 - 903913