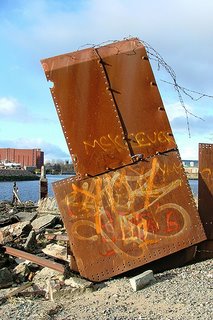 The first snows on the southern highlands now have a wider vista behind the the slow dismantling of the old distillery, like time being reversed. All the bricks being removed, taken away, turned back into dust and clay, buried back in the earth... and still we return to Dumbarton, dismantling the old, forging the new.

Winter has come early this November... it's bouldering weather - time to get on the slopers you couldn't hang in summer, time to enjoy the brief thrill of rubber biting into smooth basalt, sticking and allowing the torque to be applied... letting the power surge smoothly without the clutch slipping. Dave MacLeod is very close to the roof link-up under Gorilla, saying he feels way stronger than last year (!) - the body tension in him is locked taut as an Erskine bridge cable, which is the least required to maintain the rigid architecture between fingers and heels. 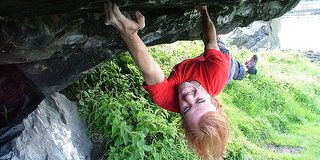 Dave MacLeod working 'Pressure'
Someone took a chainsaw to the old 2HB sycamore, a rather radical prune, but no doubt it will sprout back, stumpier but perennial (maybe best to get rid of the evidence, boys?). One benefit of this is that it has revealed A Ford Flash - Cubby's testpiece on the front wall of Eagle Boulder. It also allows an unobstructed sit-start to an excellent reverse problem to Dressed for Success, which is well-chalked at the minute and maybe a grade easier than the left to right version (Font 7b for the money). Consolidated is getting the attention of Richard McGhee - see his ridiulously huge span in the photo sequence, though what he makes up for in reach he loses in body tension, possibly making it all harder and a F8a proposition. 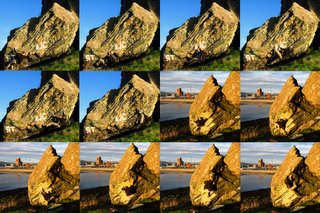 Richard McGhee on Consolidated V9
There's a good new eliminate traverse that stays dry even in atrocious weather - Shattered - which follows the lowest line of holds from the Desperado corner to a step-off under the Fever Pitch arete. The rule is simple- use the lowest holds and no high jugs for rests. It gets hard about Longbow, where a drop-down move leads to a hard cruxy sequence past the cave and under the bulge through to the arete. Dave MacLeod thought it a worthy F7c, before John Watson cheekily downgraded it to F7b+ (because he doesn't get that opportunity too often!). 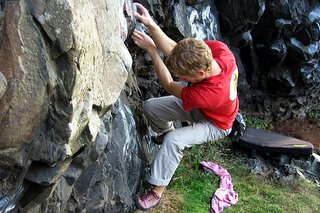 Steve Richardson on 'Shattered'
In this weather, you should be getting on the slopey classics: Gorilla, Slap Happy, Consolidated, Mugsy... it all feels like a bargain at the minute! If you are down at the Rock this winter, bring a binbag or two so that when you're boosted you can collect some cans and rubbish and throw it in the skip by the stadium - there is a party culture in the Gorilla Cave at the minute and discarded Tennent's cans seem to be appearing spontaneously, as though they leave spores. It's your local world-class bouldering venue and needs a little help sometimes, you'll not see a fluorescent council jacket down here, that's for sure...