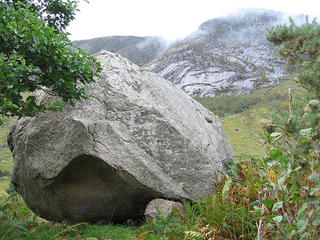 Cubby has reported his problems on the Etive boulders at www.cubbyimages.com and I paid a visit on a squally day in the mid-autumn westerlies. I stuck the wellies on and stomped along the boggy path in driving rain until it became obvious the shoreline was the better approach. The rain passed and the sun came out, the first two boulders nestling like gleaming dinosaur eggs on the brink of the loch. The problems require sit starts, with the traverses being the classic lines. 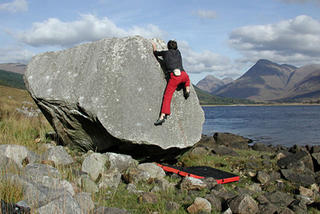 Between Heaven and Hell is a desperate traverse clockwise from the west slab lip round the boulder, I was glad it was soaked in a way, but a fresh wind and sun dried it off instantly, so I decided to come back to it... Cubby rates it as an absolute cracker, and a hard Font 7b, that's about V8 in modern currency. Silver Surfer is an excellent rockover problem on this boulder. For more info, see Cubby's site.

A further 10 minutes along the shore and a large Alder tree hides the overhangs of the Storm Boulder. The eastern ramp, without feet on the jammed boulder, leads to a slopey arete and a desperate snatch to a pink quartz vein, then an even harder snap to good holds at the top of the arete. it's well worth Font 7a V5 from the sit start and Font 6b V3 from standing. The sit start to the other arete is a tough Brit 6c, about Font 6c, as it is short but fingery powerful.

West Lip of the Storm Boulder

A nice west wall lip traverse is Font 6b V2 and there is an uu-named sit start to the west wall which looks desperate... it rained before I could fail on it! 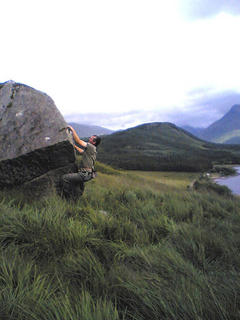 Allan Wallace has also climbed here - the crack in the Numpty boulder (seen easily from the parking spot) is a good problem on the way up to the slabs. Cubby mentioned he had played on the jumble of boulders beneath the slabs, but found them a little wanting. However, scout them if you're up there on the Coffin Stone at lunch, there may be a few hidden problems worth the hunt!

A great place for a stomp with a boulder mat - there are hidden secrets to be found here - watch this space!