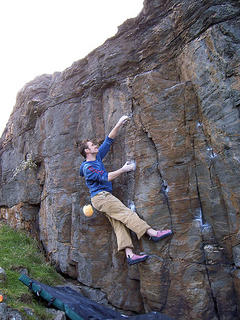 On the main area, Tim Rankin added a hard sit start called The Aberdonian, which he says is an unmissable problem if youâ€™re climbing to that level and in the area. The stand-up is easier, but also classic status amongst the problems here. John Watson added a link-up on the Bad Buoy - start up the Bad Buoy sit start to the break, traverse right to a crux cut-loose and desperate little nubbin sloper to rock up the flake problem above the mezzanine. Glasgow Bhoy V6 pic... 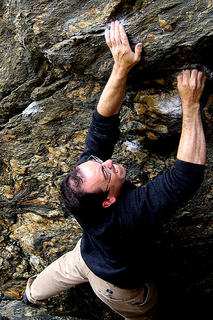 Tim Rankin has further devloped the harbour area, mainly round the big stone of the Bad Buoy Boulder and Daveâ€™s Roof across the wee bay. Hopefully weâ€™ll see a complete topo for Portlethen in the near future, as it now has hundreds of excellent gems. The best problems are Peteâ€™S Lip - the full lip traverse of the boulder skipping over to the smaller boulder to finish along that; the seaward arete of Moon Lightning and the steep central wall from a sit start (Bad Ass Buoy/Glasgow Bhoy).Thanks to Tim for all the development here! He describes the access to Portlethen thus:

This is the collective name given to the boulders and small walls situated either side of the beautiful picturesque fishing harbour on the north side of Portlethen village. There are three main areas of interest all with there own charter and a trip can easily combine a visit to all 3. Also they have contrasting features and aspects making them a good choice in unpredictable weather when it would usually be possible to find something to climb. The three areas are; The boulders and walls on the right side of the harbour as you look south dubbed Rankinâ€™s World. The long low roof of Daveâ€™s Roof on the opposite side of the harbour (the left side as you look south) and the scattering of boulders on the foreshore, north east of the harbour. All three areas are very easily accessible and Rankinâ€™s World can boast the shortest approach in the area being 30 sec from the car! Drive to Portlethen village, take the first left down past the play park, continue down the steep narrow road through the village until a private road leads right down beside a deep inlet. Park in the lay-by on the right not the turning area further on, if there is no space drive back into the village and park sensibly. For Rankinâ€™s World walk down the road to the bend and cross the barrier in the south east corner and head down the steep grass slope with care, at the bottom cut back left below a steep brown wall (â€œDusk till Dawnâ€�). It is also possible to gain this area from the harbour at low tide by skirting it on the right. For Daveâ€™s roof continue down the road and take the steps down to the harbour, skirt its left edge to the roof, 3mins. For the foreshore boulders follow the road to the white cottage, continue east on a grass path until a large undercut boulder is found (The Clam) 5mins.